Four Days before Everly’s gtube procedure she had a hearing test done and a week after the surgery I received the results. For a couple of days the audiologist and I had been playing phone tag, with every ring I became increasingly more anxious until finally she reached me. I was at a doctor’s appointment with Aaron when I received the call. I ran outside so I could speak more freely. The audiologist asked if she could meet with me the next day. I said yes but could she give me the results over the phone. She was apprehensive but agreed. She told me that Evie is missing the Semicircular Canals in both ears leaving Everly completely deaf. I kept it together just long enough to hang up and then, there in front of the doctor’s office I began to sob. Our baby would never hear her beautiful name, the one we picked just for her. My heart was broken. Another dream stolen from us. Dreams of listening to music, me introducing her to NSYNC and us making fun of the Backstreet Boys. Aaron trying to teach her to scream like they do in metal.

I still had to tell Aaron. I waited for him to come out, I didn’t know how to tell him so I just said it “Everly’s deaf”. He stayed quiet for a bit and then said “guess we’ll be learning sign language”. That was the thing about this diagnosis in a sense it was the easiest one because we already had the answer, sign language.

As I write this it makes me think about how complex your health has to be that the diagnosis of deaf is the easy one.

I ended up meeting with the audiologist the next day. She went over how they do the test and how they get the results. She told me without the Semicircular Canals Evie would not be a candidate for hearing aids of any sort. She did however mention a new procedure that was still in the trial stages. A hearing device that they connect directly in to the brain stem, at first it seemed promising until we realized it was brain surgery then it just seemed scary. We would discuss it a few more time but ultimately we decided that we didn’t want to put Evie through any more than she had already been through. From then on we began learning American Sign Language. I never imagined I’d be learning a new language in my 30’s but here I sit. As for Evie she’s picking it up like a champ. Sadly, to my dismay her first word was “Dad”. All she has to do is sign Dad and he truly becomes putty in her hands! Yes, a story as old as time. This father/daughter bond is strong! 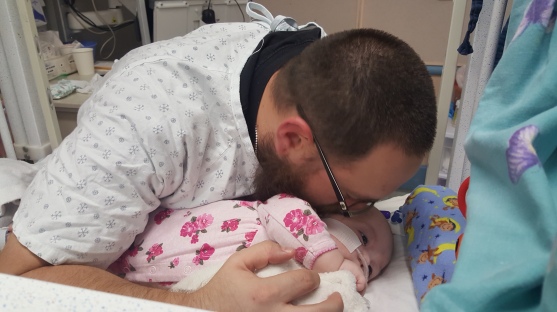