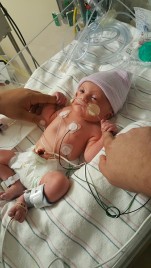 The doctors and nurses are all staring at us, Dr. Rhed  “We tried to remove her off the ventilator and she went in to cardiac arrest.”

Before we go there let me take you back to where it all started, this journey of heartache and love.

Aaron and I had been pregnant before, two times in fact but there was something about this baby. When I saw her in an ultrasound I knew this one was going to stick. After suffering two miscarriages doctor’s appointment were a mix of emotions both of us scared we wouldn’t hear a heartbeat. As the months rolled on with reserved excitement I couldn’t shake this nagging feeling that something wasn’t right but with each appointment I would be reassured, our baby was perfect.

As any pregnant women knows the last trimester is tolerable at best. So there I lay in the middle of the night I can’t sleep because there’s that feeling again. I start googling pictures of ultrasounds specifically ones where the baby has Down syndrome I’d compare them to my ultrasound. There not the same but there’s something wrong and I know it!

The next morning I woke up to go pee and I felt a little gush. Nothing dramatic like you might see in the movies but big enough to make me wonder if my water broke and yet small enough to make me think it could have just been pee. I call the doctor and she tells me to go to the hospital so they can check if my water broke. They do the test and lo-in-behold it had. I was shocked. I wasn’t ready. I was only 35 weeks we hadn’t even picked  a name yet but nevertheless it was go time.

The pediatrician told us that because the baby was early they would be taking her almost immediately to the nursery to observe her. It’s not what I wanted but I knew it was what was best.

After 12 hours of labor on the fourth of July our baby girl was born, Everly Paige. She was perfect. She was my heart. I got to hold her for just a couple minutes and then they took her. Before they would let me see her the doctor came to talk to us. She explained that her ear had not fully developed and it looked like she had partial facial palsy. I immediately started thinking of successful people with the same characteristics, telling myself it would be ok. The doctor also explained that Everly was having a little trouble breathing but she thought it was because she was little early and just needed until the end of the week to get a bit stronger before we can take her home.

After 7 hours I was able to see her she look like a little doll except this doll was covered in wires and was on oxygen. I asked to hold her they didn’t think it was a good idea. I couldn’t help it, I started to cry. This isn’t how it was supposed to be. She was supposed to be perfect.

A couple hours later a different doctor came to speak to us to tell us that Everly kept desatting(A decrease in oxygen) and although they weren’t significant(more than 20 seconds) they weren’t equipped to deal with an emergency and he thought it was best to transfer her to Benioff Children’s hospital Oakland and they would be doing it in within the hour. My heart was breaking for my little girl. All I’d dreamt for her was an easy life instead she’d have to face death before every breath.

Before she was transferred a nurse had warned us that it would look very dramatic. They rolled Everly into our room she was inside of an incubator strapped down to the gurney with two thick black straps, wires and machines everywhere and 5 full-grown men all for this little 5 pound baby. The sight of it all brought us to our knees and the gravity of the situation hit us like a ton of bricks. I knew something was wrong.

6 thoughts on “A NICU Story(Preface)”