After the pneumonia it was expected that Everly would make a full recovery but to everyone’s surprise she didn’t. For some reason she could no longer maintain her oxygen without extra support. Before Everly got sick she was on a cannula during the day and at night she was on the CPAP but after her illness the cannula could no longer support her and she had to be on the CPAP all day. The doctors weren’t sure why she was requiring so much extra support. They decided to do x-rays and ultrasounds of her lungs and heart. What they had found along with the holes in her heart was that her heart was enlarged and she had a pulmonary stenosis. The Pulmonary Stenosis meant that there wasn’t sufficient blood flow to her pulmonary artery to maintain normal oxygen saturations. The pneumonia put too much stress on her heart and as a result she would never fully recover without medical intervention.

The plan was to do a procedure called cardiac catheterization which is a catheter that is inserted into her heart through her groin. If all went well they would be able to close the two holes in her heart and insert a balloon into her artery to widen it. Everly once again was put under and rolled away. It didn’t take long for news to come back. The holes were too big to be closed with a catheter and they could not dilate her artery using the balloon. Everly would need open heart surgery.

However, the holidays were upon us which meant unless it was an emergency the surgery would not be done until after Christmas. This entire time Aaron and I had not been on a date. Between the 700.00 gas bill, 400.00 food bill and the 100.00 a month parking bill there wasn’t much time or money left over to eat out. In fact Aaron had to get 2nd job just to keep our heads above water but this Christmas we decided to splurge. We bought Evie her first Christmas presents, got a hotel and went on our first date in 5 ½ months. I never thought I’d spend Christmas Eve at a Chevy’s but as long as I was with my husband I didn’t care. The next day we went to the hospital to spend Christmas Day with Everly. I was determined to make it feel special. We put her in a first christmas outfit and helped her open presents. There may not have been a Christmas tree or tamales or music but I was with my family and in that sense it was perfect. 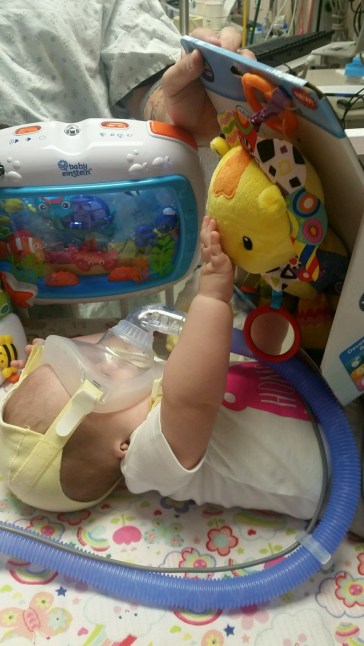 The holidays were over and the day had come. Aaron and I had stayed at a hotel to make sure we would get there before they took her into surgery. What Everly didn’t know was that she had a lot of family that had come to the hospital to support her. The moment had come. Aaron and I walked with her as far as they would let us. We watched them take her through the doors and then we watched the doors shut. I started to cry because I knew what they were going to do to her. They first were going to cut open her chest, purposely break her breast bone to expose her heart which was about the size of a walnut, put her on a heart lung bypass machine which means her heart was no longer beating, they will close the two holes, put a stent into her artery, remove her off the bypass machine, hope her heart beats again, close her breast bone using wires that will stay in her forever and then close her up. All while hoping nothing goes wrong.